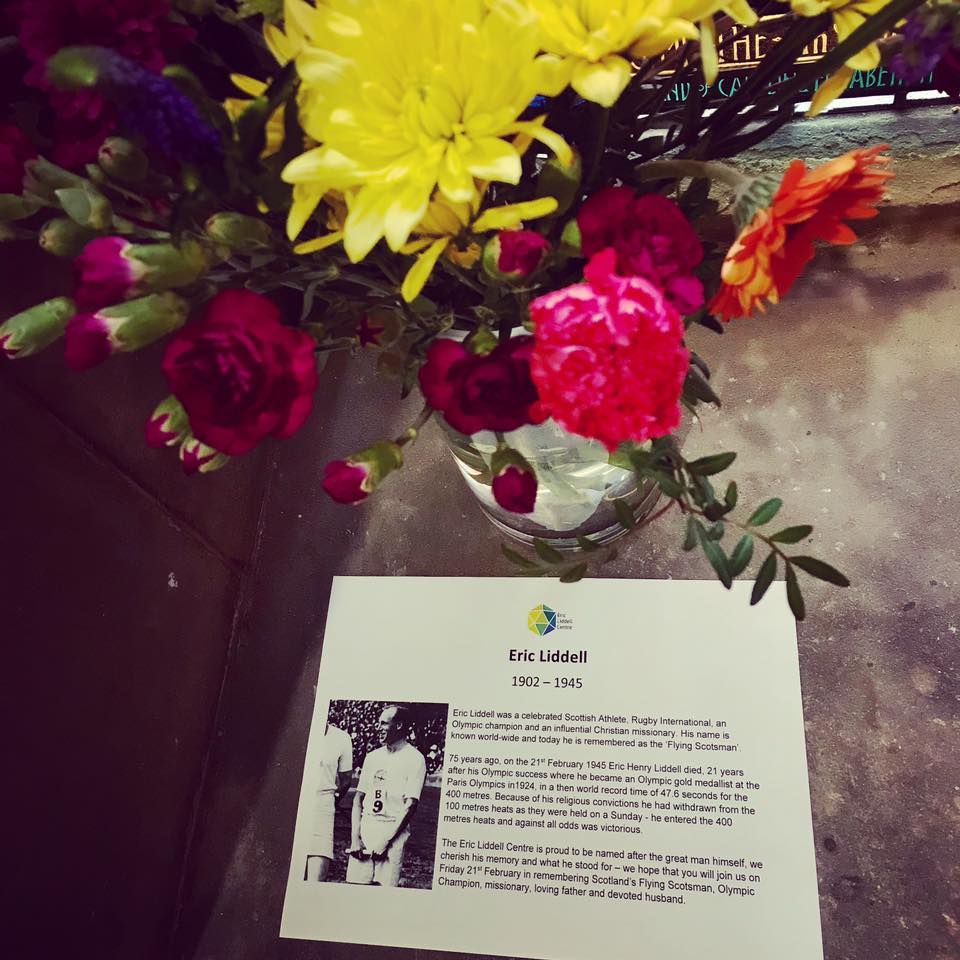 Eric Liddell was a celebrated Scottish Athlete, Rugby International, an Olympic champion and an influential Christian missionary. His name is known world-wide and today he is remembered as the ‘Flying Scotsman’.

He is a sporting and cultural icon.

75 years ago, on the 21st February 1945 Eric Henry Liddell died, 21 years after his Olympic success where he became an Olympic gold medallist at the Paris Olympics in1924, in a then world record time of 47.6 seconds for the 400 metres. Because of his religious convictions he had withdrawn from the 100 metres heats as they were held on a Sunday – he entered the 400 metres heats and against all odds was victorious.

Following the Olympics and his graduation from Edinburgh University, with a BSc in Pure Science, he returned to China to follow his parents lead and initially taught science in a missionary school. He then undertook a range of missionary work in dangerous times of conflict, poverty, persecution and war. This culminated in Eric being held in a Japanese internment camp in Tientsin 1943, where he remained until his death in 1945.

21st February is a significant day to remember this Scottish Olympic legend, to honour his sacrifices, his support for others and his passing.

Eric’s eldest daughter, Patricia Liddell-Russell said: “My dad Eric, was a loving, caring father and husband. He was also a humanitarian and was devoted helping local people. I’m delighted to see that The Eric Liddell Centre is keeping his name alive, as I know he would be pleased to endorse their work, which resonates with what he was committed to – caring and supporting the needs of others.”

In his publication, ‘The Disciplines of the Christian life’, one of Eric’s guiding questions was: ‘What am I living for — self, money, place, power? Or are my powers at the disposal of human need…?’

Meeting human need was the motivator for the founders of the Eric Liddell Centre, whose first community outreach programmes began almost 40 years ago.

The Eric Liddell Centre cares for people as they would do for one of their own and encourage families to live life to the max, regardless of circumstances and challenges.

The Eric Liddell Centre is proud to be named after the great man himself, we cherish his memory and what he stood for.

He is one of our own.